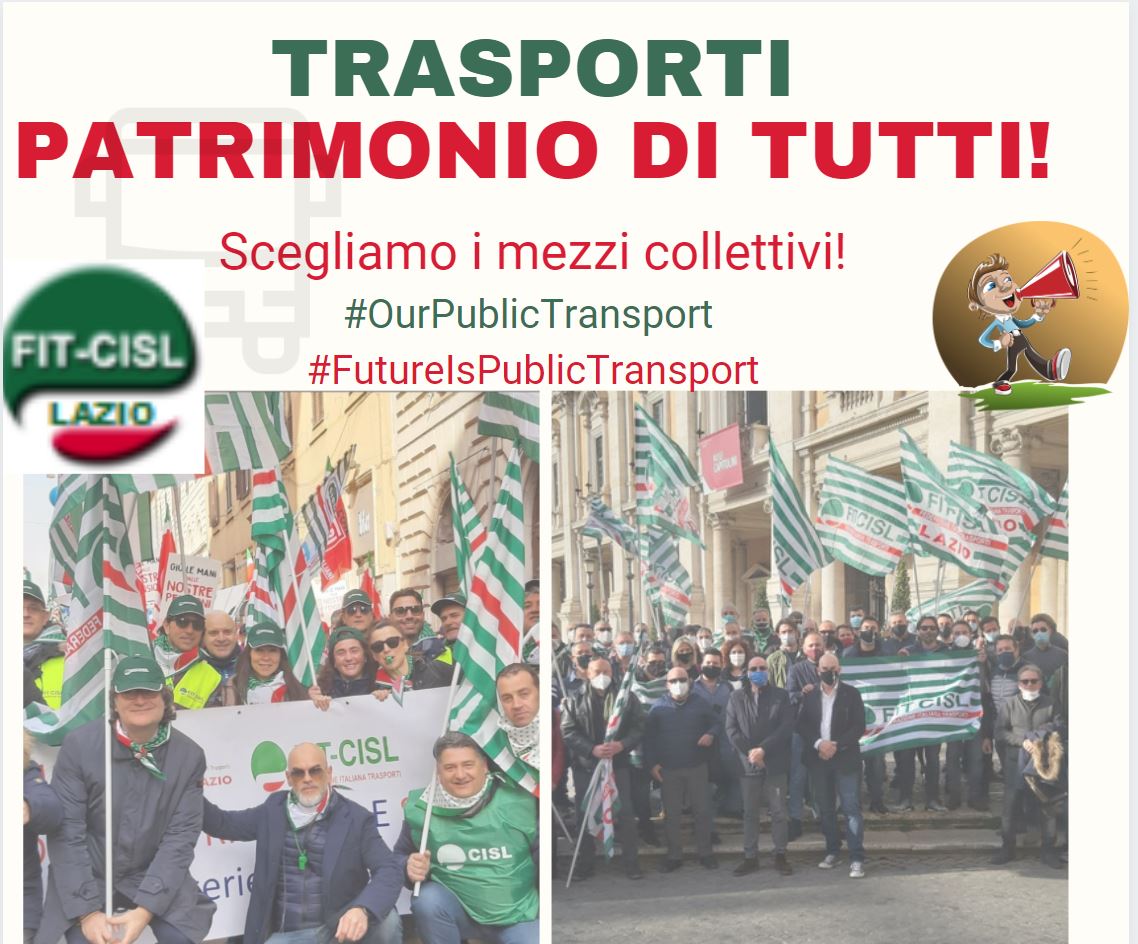 “In a city like our capital, and in the Lazio region, it is necessary to invest in public and ‘green’ transport, to protect mobility and environment”

“Transport is a collective asset, and it must remain so: this is why we have joined the campaign ‘The Future is Public Transport’, jointly organized by the International Transport Workers’ Federation, and the C40, the global network of large cities that works to reduce greenhouse gas emissions.”
“It is more important than ever to create a network to protect the earth from pollution, and to ensure efficient and quality in public transport, which guarantees mobility in the center as well as in the suburbs “.
This is what the General Secretary of Fit-Cisl Lazio, Marino Masucci, declares in a note, adding that “from the Amazon strike, which was held in Italy a week ago, collecting European and global solidarity, passing through the today’s abstention from work of the logistics workers, who have received declarations of international support, up to the European riders’ meetings in which we participate with great interest, we are reaffirming more and more strongly that true power is in Unity”.
“ To build a better future, in an increasingly globalized world, united by the fight against the pandemic, it is necessary to network and share experiences. On our part, we believe that in a city as complex from a morphological and social point of view as Rome, and for a territory such as Lazio, the public nature of transport is crucial: we also trust that investing in vehicles for collective transport and in an increasingly ‘green’ local public transport sector is crucial for the future of our capital and the region. This affects the quality of life and air and the mobility of citizens, who cannot continue to live in a city congested by the surplus of private vehicles “.
“We have no doubt that it is important – concludes the trade unionist – to remain open to the application of best practices adopted at international and European level with regard to public transport, and to reiterate that ‘public’ is not synonymous with inefficient, as masterfully demonstrated in the essay ‘The Great Divestiture’ by Massimo Florio, professor of public economy at the University of Milan. On the contrary, with a series of targeted interventions and an efficient managerial class, institutions can achieve important results, also in ecological terms, and remain in profit, as is the case for 87% of public companies operating in the sector “.
Rome, March 29, 2021

This website uses cookies to improve your experience while you navigate through the website. Out of these, the cookies that are categorized as necessary are stored on your browser as they are essential for the working of basic functionalities of the website. We also use third-party cookies that help us analyze and understand how you use this website. These cookies will be stored in your browser only with your consent. You also have the option to opt-out of these cookies. But opting out of some of these cookies may affect your browsing experience.
Necessary Sempre abilitato
Necessary cookies are absolutely essential for the website to function properly. These cookies ensure basic functionalities and security features of the website, anonymously.
Functional
Functional cookies help to perform certain functionalities like sharing the content of the website on social media platforms, collect feedbacks, and other third-party features.
Performance
Performance cookies are used to understand and analyze the key performance indexes of the website which helps in delivering a better user experience for the visitors.
Analytics
Analytical cookies are used to understand how visitors interact with the website. These cookies help provide information on metrics the number of visitors, bounce rate, traffic source, etc.
Advertisement
Advertisement cookies are used to provide visitors with relevant ads and marketing campaigns. These cookies track visitors across websites and collect information to provide customized ads.
Others
Other uncategorized cookies are those that are being analyzed and have not been classified into a category as yet.
ACCETTA E SALVA
Powered by